Well, this was the last week in the lab. It was a mad dash to finish getting results from the ongoing EPD experiments. Last week, we used the larger electrodes, but this week we changed to small electrodes that can be put directly under the microscope. We wanted to use AFM and SEM to study the electrodes more rigorously rather than simply using eye-tests.

First we made the new electrode setup by using gold-plated silicon wafers that measured 20mmX20mm. We soldered wires to the electrodes and connected that to the power supply using alligator cables.

New electrode setup for analysis. This view shows the electrodes unfolded from experimental setup. During the EPD experiments, the two gold squares face each other(parallel plates).

Then we performed EPD in 3 different mixtures: PVDF-TrFE in IPA, Hydroxyapatite(lab-synthesized from my prior experiments) in IPA, and Hydroxyapatite(purchased from a vendor) in IPA. We then performed several rounds of EPD by varying the deposition time, the number of depositions, and the effect of subsequent depositions in PVDF and HAp.

The variety of samples that were made from the various mixtures, deposition times, and deposition sequences.

After the experiments, we tested the samples using AFM, SEM, and XRD. The results were not fully convincing because of the limited sample size, but we found that longer deposition times of 20 minutes lead to the best results.

XRD results from the PVDF depositions in various conditions. The 20min deposition sample had the highest peak intensity at 20 degrees, which is characteristic of PVDF.

5umx5um image of 20min PVDF sample from AFM. The fiber-like pattern seen is evidence of the piezoelectic property of PVDF.

We also made samples to compare the two HAp powders. 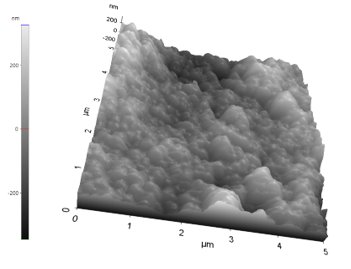 Once Soyun, Jingshu, and I finished collecting this data, I made a slide show and presented it to our lab on Thursday(8/5). I spoke mostly about our experiments and date, but at the end I shared a little bit about the overall experience I had during the program.

The last day at the lab was a sad one. Although I was ready to go home, I knew I would miss the friends I had made during the past two months.

Last day at KAIST. Nathan, Jingshu, Hui, and me

Well, the last week in the lab was a busy one, so there was not much going on during the week outside of work. Unfortunately, I did not get to play any basketball like I was hoping. However, that didn’t matter much considering the weekend trip to Jeju. On Friday night, I took a plane to Jeju and met up with the others. After finding the hotel, we ate some dinner at the nearby dock.

The next morning, I hiked Hallasan, the dormant volcano that sits in the middle of the island. It was long. It was hot. It was exhausting. I got rained on. But I would do it all again in a heartbeat. I did not take the trail that led to the top of the volcano(where there is now a small lake) but I still had some great views.

In the distance you could see the city, but the clouds made it difficult.

The peak of Hallasan. At the very top there is a lake. Next time I have to get there.

During the climb down the mountain

Sunday, the group took a taxi around Jeju and saw a bunch of famous places. My favorite was Jeongbang Falls. It was a waterfall that poured out into the ocean.

The base of the waterfall

The ocean right behind the previous picture

Overall the trip to Jeju was incredible. I love to do things outside so this trip was perfect for that. I’m very glad we made it there for the final weekend adventure in Korea.